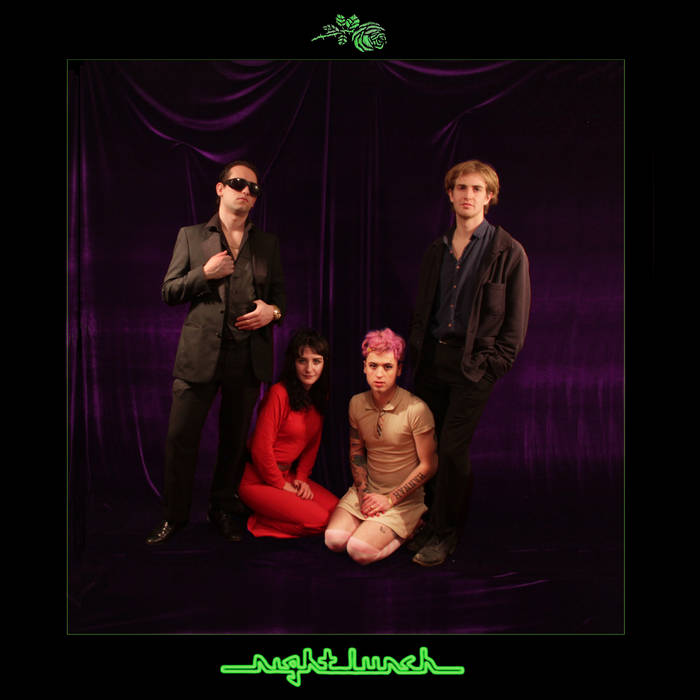 the_ri Night Lunch from Montreal are the best band of the 21st century! The songs are brilliantly written and performed. See them live if you can, it's a treat.

At long last Night Lunch arrives on vinyl. Wall of Love is a confirmation of the towering talents of this honourable crew, long labouring with love in the Montreal underground. The members of Night Lunch have toiled in the shadowy corners of QC’s own sin city, enriching its DIY scene for the better part of a decade, manifesting in such esteemed combos as Baked Goods and The Marlees. Now as Night Lunch, their retro-futurist sex-syrup concoction is fully realized; patented, potent, and keenly produced; emerging from the lo-fi mud to reveal a shimmering gem of pop immortality.

Lead track 'Your Body' is a rehash of one of the standouts from Baked Goods’ Basement Glam CS which made waves back in 2012, and with wider tape it shines here like the cult-hit-radio-smash single it was fated to be, Lukie Lovechild’s vocals soaring with rapturous melody, and warm synth subbing in for the infectious guitar hook. ‘Motorhome’ quickly follows, introducing Marlee Kay’s moonlit vocals over instrumentation that is haunting and inviting, light and heavy. By this point it becomes clear the group has developed an aura all their own, fusing three quarters of a century of rock majesty to the echoing sounds of the Montreal underground. The nostalgia of 80's synth ‘n keys are a definite inspiration for this group, but unlike many acts that seek to revive that trend, Night Lunch comes from a place of timeless pop sensibility, as displayed in the manic croon and rolling doo-wop of 'Five Lies'. Instrumental 'Pumpkin' starts as a space age bachelor pad lounger à la Esquivel, briefly bursting into fuzzy theme rock for colour TV. 'Long time woman' hints at a non-derivative Fleetwood Mac influence, easily rivaling MTL superstars TOPS in the sophisti-pop realm, but without the shallow, trendy lacquer; you could conceive Night Lunch as retro soft-rock because of their comfortable extraction of widely-beloved elements of decades past, but there's a directness to these songs and performances that will please even the most jaded of rockers. ‘Darlene’ ushers in a rootsy swagger wedded to the grandeur of Roy Orbison; an inclination that also strongly inflects the closing title track.

Not many groups are capable of comfortably making cameos in both Back To The Future II and Jim Jarmusch's Mystery Train, as Night Lunch are. Should this press release be written on typewriter or tablet? This, however, does not mean their vision is unclear, though they may be the kind to wear their dirty sunglasses at night. A wingspan which encompasses past, present, and future is key to their opening a portal of eternity. Any dissonance this historical conundrum evokes in the listener serves only to disarm critical faculties and incite pure pleasure; serving up sophisticated sonic depravity; a rock n roll buffet under the foggy full moon. Night Lunch has evolved from lo-fi synth obscuros into Adult Rock/Pop generalists, indicative of their ability to not only survive but thrive in multiple niches, uniting the fragmented field of DIY in this siloed age. Until Night Lunch can return to a shadowy stage near you, Wall Of Love will have them lurking in your dreams; slow-dancing with your unconscious mind.

Night Lunch is a 4 piece creep-pop group from Montreal. We are dedicated to releasing albums & touring.

Bandcamp Daily  your guide to the world of Bandcamp

New sounds from Mavi, Ivy Sole & Moderator, plus AJ, the One joins the show, for her latest release